Continued from part 17: The llama master

In writing this series I spent a lot of time searching eBay for older Linux games to cover, and one night I came across a curious sight. Although it is sold for Windows, I found an offer for a physical copy of the free game Circus Linux! as published by Alten8. At first I thought it would just be a keepsake box in my collection with “Linux” on the sleeve, but upon inspecting the contents of the disc it quickly became apparent how inexpensive this retail release was.

All Alten8 seems to have done was package the source folder with a Windows binary already built, with the installation instructions urging you to “copy and paste the CIRCUS folder from the CD” and then click the file circuslinux.exe. With the included source code, I decided it would be trivial to build the game for Linux as well, and in fact the included INSTALL.txt file even tells you how to compile and install the game on Linux using GNU Automake.

You do need the relevant SDL development libraries as packaged by your distribution, and unfortunately Alten8 seemed to remove some of the game’s documentation files, meaning the build will initially fail. To get around this I just used the command “touch AUTHORS.txt COPYING.txt CHANGES.txt README-SDL.txt” to create empty placeholders, but novelty aside, you’re better off grabbing the source code yourself online.

Circus Linux! itself is a remake of the older one Circus Atariwhich itself was a home console version of the even older one Circus arcade cabinet from Taito. Circus was a blockbreaker game inspired by Breaking out, with the main change being that the game now simulates a teeterboard act, where the blocks become balloons and you paddle a seesaw. This has a distinct gameplay difference, as you have to make sure your clown lands on the correct end of the teeterboard.

Circus Linux! goes all-in on the theme in a way the original Atari version never could, with bright colorful animated graphics and fun upbeat music and sound effects, showcasing the power of the then-fresh Simple DirectMedia Layer. One annoyance is that the mouse can leave the window when not playing full screen, but at least the game supports some screen modes, including a lower graphics setting for less powerful computers. 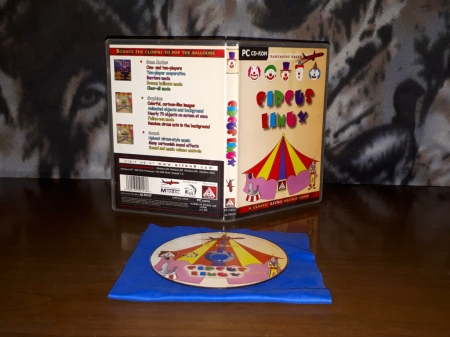 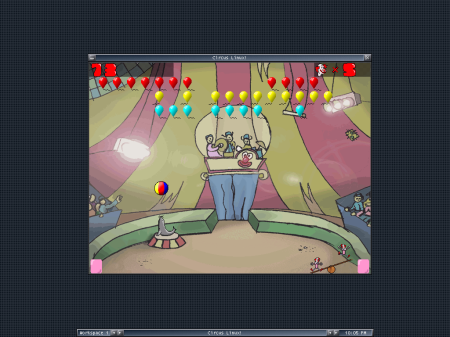 Needless to say, even at full game my Pentium III 500 Mhz didn’t break a sweat, but I appreciate the option. In addition, the game includes a number of gameplay modifiers: “Barriers” that can block your shots, “Bouncy Balloons” that can cause the clown to fall back on contact, and “Clear All” that requires each balloon to be popped on a stage. before going to the next screen.

Like most arcade games Circus Linux! is a test of both your agility and stamina, challenging you to hold on for as long as possible while achieving the highest possible score. The game also supports local hot seat multiplayer, either in a cooperative mode where you both get a chance to pop each other’s balloons, or an adversarial mode where you compete to get the highest possible score.

Maybe more compelling then Circus Linux! in itself stands the legacy of creator Bill Kendrick and his development house New Breed Software, a prolific figure in the free and open source gaming scene. He is best known for his work on the platform game SupperTux and creating the drawing program Tux paintalong with others in the Tux4Kids initiative have popularized Tux as a gaming icon, all alongside the work of the likes of Steve Baker and Ingo Ruhnke.

Bill Kendrick has also created a number of other arcade conversions, edutainment and experimental software toys which he ports to the widest possible range of platforms, all of which can still be found on the New Breed Software website. five of them, x bomber, Crazy bomber, 3D Pong, ICBM3Dand Gem Drop X, were recorded on 100 Great Linux Games. He even had a chatbot called Virtual Kendrickinspired by a comment that he should port himself to the Zaurus handheld.

I’ve avoided it long enough, but I feel the itch to play a first person shooter again. As already made clear, Linux has never had a shortage of them, but some are much harder to find than others these days. The next game I’m going to cover is one of the rarest of them all, due to limited physical distribution and an attachment to a Belgian company now known more for maintaining an operating system than porting games.

We continue in part 19: Sinsational

The absurdly priced laptop I’d love to own

TSA found a double-edged blade hidden in a gaming laptop

Is PC gaming more expensive today than it was a decade ago?