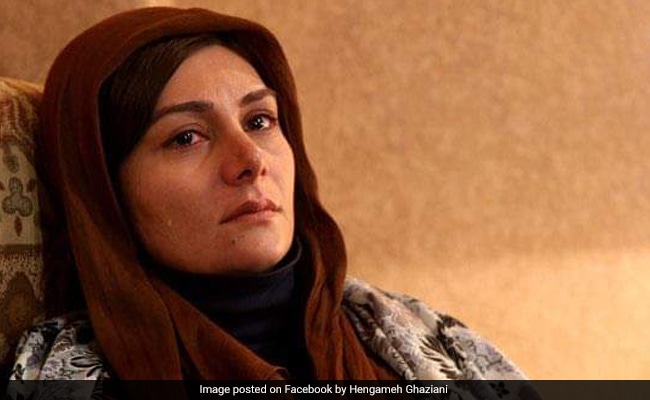 Hengameh Ghaziani has been an outspoken critic of the crackdown on protesters. (File)

Iran has arrested a prominent actor who publicly removed her headscarf in a video in an apparent act of defiance, state media reported Sunday, as protests swept the country.

Iran’s spiritual leadership has been rocked by more than two months of women-led demonstrations following the death in custody of Mahsa Amini, a 22-year-old woman of Kurdish descent who was arrested by the morality police in Tehran.

Authorities in the Islamic republic described the protests as “riots” and accused the country’s Western enemies of fomenting them.

Hengameh Ghaziani, an outspoken critic of the crackdown on demonstrators, was arrested for inciting and supporting the “riots” and for communicating with opposition media, the official IRNA news agency said.

The 52-year-old film star had already indicated that she had been summoned by the judiciary, and then posted a video on Instagram in which she took off the mandatory hijab herself.

“Maybe this will be my last post,” she wrote late Saturday.

“From this moment on, whatever happens to me, know that as always I am with the Iranian people until my last breath.”

The video, which appears to have been filmed on a shopping street, shows Ghaziani staring bareheaded at the camera without saying anything, then turning around and tying her hair back in a ponytail.

In a post last week, she accused the Iranian government of “child murderer” of “murdering” more than 50 children.

According to the judiciary’s Mizan Online news website, Ghaziani was one of eight people summoned before the prosecution for “provocative” material posted on social media.

Among them was Yahya Golmohammadi, coach of Persepolis FC, Tehran’s football team, who had strongly criticized Iran’s national team players for not “bringing the voice of oppressed people to the ears of the authorities”.

The comment came after the national football team met President Ebrahim Raisi last week ahead of their appearance at the World Cup, which began in Qatar on Sunday.

Mizan said other prominent actors including Mitra Hajjar and Baran Kosari had also been called up.

Earlier this month, Taraneh Alidoosti, one of Iran’s best-known actors who is still in the country, posted a photo of himself on social media without the mandatory headscarf.

Alidoosti vowed to stay in her homeland at “any cost” and said she intended to stop working and instead support the families of those killed or arrested during the protest.

Iranian film figures were already under pressure before the start of the protest movement that arose after Amini’s death.

(Except for the headline, this story has not been edited by NDTV staff and is being published from a syndicated feed.)

Ranveer Singh, Govinda and other celebrities arrived in style

Mexican woman killed for her organs after online dating failed

‘Joyland’ ban: Pakistan blocks the national release of a film with a sexual liberation story