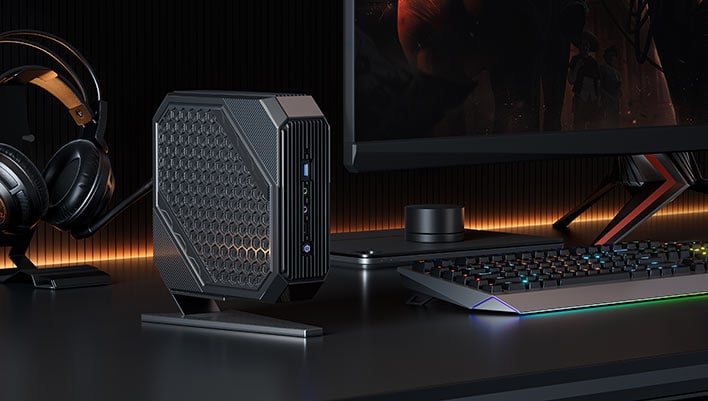 Hong Kong-based Minisforum has been busy carving a niche for itself in the mini PC arena over the past few months, with a variety of releases. One of the latest small PC launches is that of the Minisforum HX90G, a very compact, small form factor PC that combines a powerful mix of AMD’s modern laptop components and packs them into a well-cooled 8-inch square (and 2.5-inch thick) frame . We were very interested to see what this NUC Extreme alternative based on full AMD performance components would offer. That’s why we ran one through our test lab and can now make comparisons with some of Intel’s gaming/creator oriented NUC models, as well as a range of popular gaming laptops.

Inside the Minisforum HX90G is a powerful processor in the form of the AMD Ryzen 9 5900HX. Yes, this is a processor aimed at performance laptops rather than desktops, but the Zen 3 architecture, 8 cores and 16 threads, base/boost clocks of 3.3/4.6 GHz, configurable TDP of 35-54W (this one ran at 54W under load) , 16MB L3 cache and TSMC N7 build all point to an efficient yet muscular performer.

The other AMD performance component here is the RDNA 2 graphics architecture Radeon RX 6600M (GDDR6 8GB). Compared to how NVIDIA significantly downsizes its GeForce laptop GPUs relative to its desktop versions, the Radeon RX 6600M is a breath of fresh air for laptop users (and SFF systems with the HX90G). The Navi 23 GPU here has the same number of streaming processors as its desktop counterpart, as well as the same memory complement, speed, and bus width. The only difference is that the base/boost clocks of the mobile version are tuned lower, so they fall within a 100W power envelope. With AMD and partners, desktop Radeon RX 6600 cards can be boosted to 130W and beyond. See the table below for the rest of the system’s technical specifications. 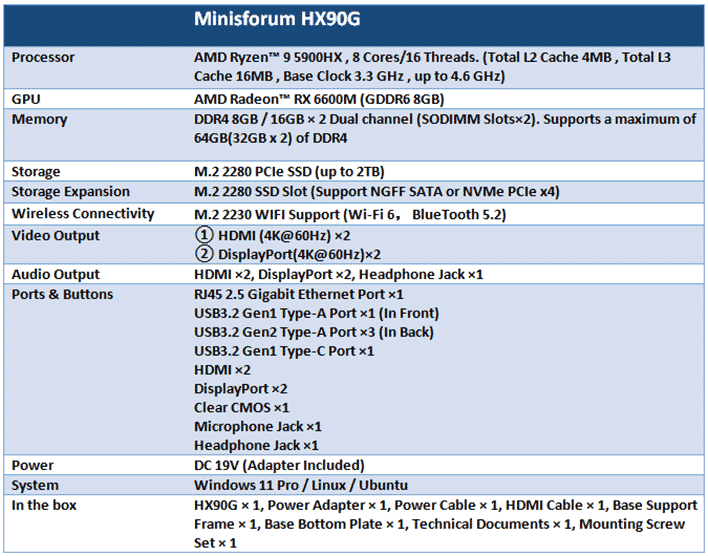 With the hardware specs out of the way, let’s take a look at the design. First of all, this is an attractive design due to its compact size. Earlier we mentioned it, it’s 8×8-inches square and 2.5-inches thick. It can rest on one side, on two rubber feet, and in this direction the two cooling fans of about 100mm will draw in air from above and push it out on the left and right sides. A V-shaped stand is included in the box, which you can use if you want to position the HX90G vertically, taking air in from the left and throwing it off from above and below. Some people would probably have liked the ability to mount this PC to the back of a monitor via VESA, but there are no suitable screw holes or fittings here.

One aspect of the design we’re less enthusiastic about is the materials used for the chassis construction. Minisforum highlights the build’s “Carbon Fiber Armors”, which use 70% carbon fiber and 30% resin. However, these are a few ‘elbow pieces’ tacked to corners and non-ventilated surfaces, to distract from what is essentially a perforated plastic box. It felt a little creaky to handle, but we’re confident it’s robust enough for its intended use on a desk – it’s not designed for anything more difficult than that, but neither are most desktops.

The port selection on the Minisforum HX90G could be a little better, even though it is admittedly small, like a mini PC. Using a wired keyboard and mouse and a USB sound card (more on this later) took advantage of all the rear USB ports. So yes, there are only three USB ports on the back. A USB-connected printer that would normally always be plugged in was just plugged into the Type-A port on the front to quickly fire off a few pages. On the front is the only USB Type-C port, supporting USB3.2 Gen1 speeds. Of the various USB dongles we have in the office, the best connect via USB-C, but it would be unsightly to leave attached to the front forever. 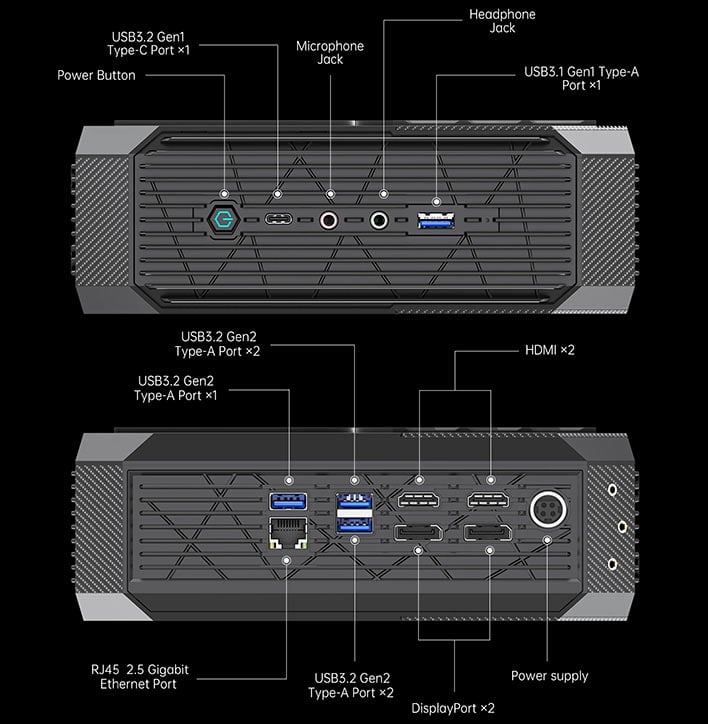 However, those looking to connect multiple monitors will be well catered for here, with the dual HDMI and dual DP ports. Minisforum says they can support up to four simultaneous 4K displays at 60Hz. For our testing, we were happy using a single DP port connected to a FreeSync 1440p monitor (although games were run at 1080p settings for fair comparisons to previous benchmarks on previous machines).

We’ve added another 1 TB of storage as games and apps have a large footprint these days.

Before plugging the machine in for the first time, we felt the need to flip it open for a quick look. Getting access to the PCB area where you can upgrade the RAM and SSDs was really easy, but you had to pry off the rubber feet (be careful not to get fluff on the adhesive). We noticed that the supplied HX90G sample had two ADATA-branded 8GB DDR4 3200 SODIMM modules pre-installed. The included 512GB M.2 SSD (ESO brand reported by Windows, but label hidden by heatsink) wouldn’t be enough for the Hot Hardware game test library, without shaking things up, so we added a Kingston A2000 NVMe SSD to the spare M. .2 slot.