Please note that this post has been tagged as a rumor.

Wccftech has gotten its hands on preliminary specs and launch date for the upcoming NVIDIA GeForce RTX 40 series for laptops.

The site claims to have initial, if a bit confusing, information about the next-generation GeForce series for laptops. The information is confusing because the source materials mix up different SKU names for the high-performance parts. The flagship component is called RTX 4090 or RTX 4080 Ti (Laptop GPU), both names are said to be present in embargoed materials.

At this point, it would make more sense to go with NVIDIA GPU code names instead, such as GN21-X11, X9, X6, X4, and X2. Those names were already mentioned last month by the other leaker. However, given the recent rumors that AMD might launch the Radeon RX 7900M mobile GPU, it would make sense for NVIDIA to launch the RTX 4090 Laptop GPU as well. 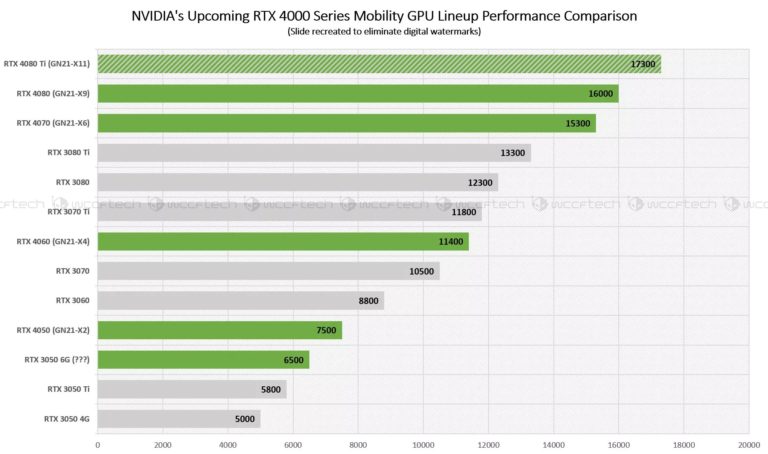 The new data confirms that NVIDIA will announce its RTX 40 series in January. The exact time for lifting the embargo is January 3, 2023 at 9am PT. However, the actual launch should take place around mid-February.

Interestingly, it is said that the RTX 40 series will be announced alongside Raptor Lake-H, Intel’s new mobile platform. The company previously stated that Intel Raptor Lake mobile will launch at the end of this year, so it’s not clear if the series has been postponed or if there’s some confusion with the words “announcement” and “launch.” However, it has become a tradition for Intel, AMD and NVIDIA to introduce new mobile products at CES.

Shakedry dust is retired by Gore