Pfizer and Moderna have launched trials to determine whether their Covid vaccines have long-term negative health consequences.

The studies involved monitoring the small number of Americans who experienced rare side effects over the past two years after receiving the injections.

Both companies were required earlier this year to conduct this long-term study by the Food and Drug Administration (FDA) as a condition of approval.

Inflammation of the heart is the most common serious side effect reported with the injections – although it is still very rare.

A study from the British Columbia Center for Disease Control in Canada found that 58 of every million recipients of Moderna’s dual vaccine developed the condition.

The same study found that 21 of every million recipients of the original two-dose Pfizer vaccine also suffered from heart problems.

The Centers for Disease Control and Prevention (CDC) said it has recorded about 1,000 cases of heart inflammation among youth under the age of 18 who have received Covid immunizations.

While these cases usually clear up on their own without medical intervention, some fear that heart damage could develop in the long run. 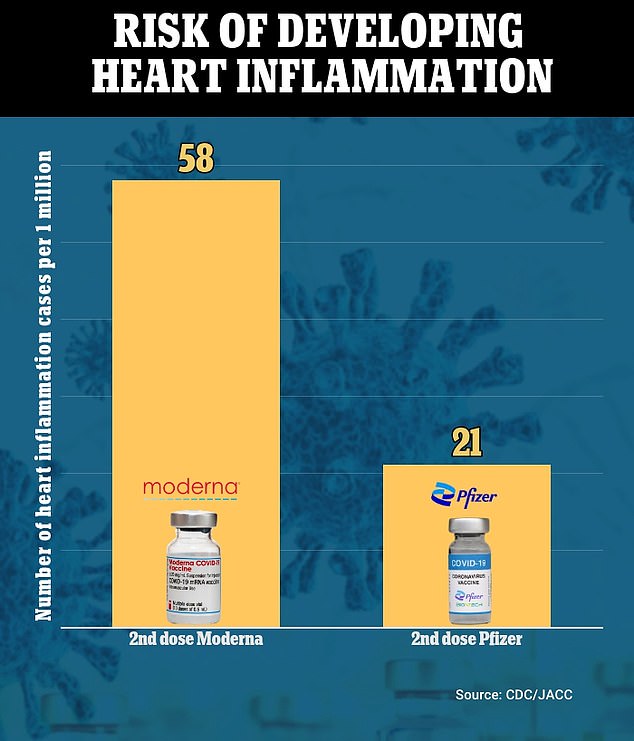 A recent Canadian study found that 58 of every million recipients of the Moderna COVID-19 vaccine developed heart inflammation. Before Pfizer’s jab, the rate was 21 per million 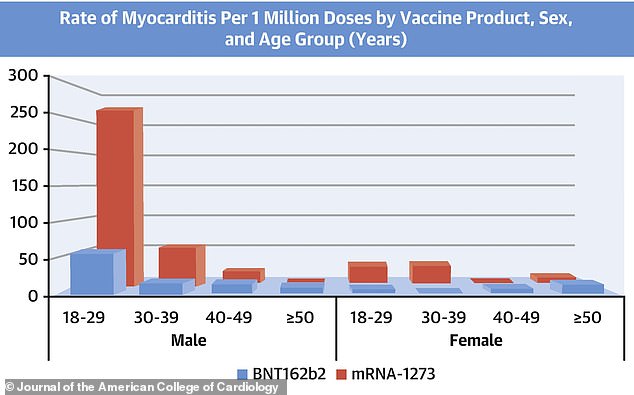 Younger men are most likely to develop heart inflammation as a result of COVID-19 vaccination. The Canadian study found that more than 250 out of every 1 million male recipients of the Moderna injection between the ages of 18 and 29 developed a heart problem. 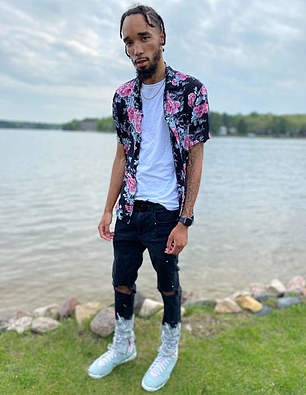 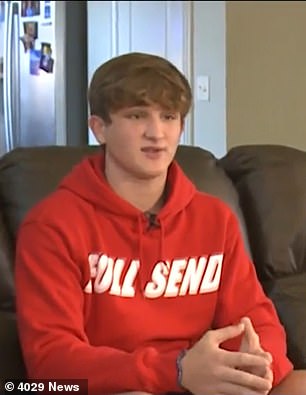 Da’Vion Miller (left), 22, of Detroit, Michigan, suffered from myocarditis after receiving an injection of the Pfizer COVID-19 vaccine. Isaiah Harris (right), 18, of Springfield, Arkansas, suffered a heart attack due to myocarditis. He had only been vaccinated the day before.

Moderna, based in Cambridge, Massachusetts, has already launched two trials to track the adverse effects of its injection, the most recent in September.

New York City-based Pfizer told NBC it will begin a trial with 500 teens and young adults under the age of 21 in the coming months.

The firms will follow some patients for up to five years, but results are expected to come in as early as next year, NBC reports.

Both companies used mRNA technology to develop their shots.

Myocarditis: A potentially deadly condition linked to COVID-19 and the flu

Myocarditis is a relatively rare condition that occurs when a person’s myocardium — the middle layer of their heart — becomes inflamed.

It is usually a mild condition that will resolve itself within a few weeks without medical intervention.

In some cases, it can lead to stroke, heart attack, heart failure, or even death.

The condition can affect how a person’s heart pumps blood around the body.

It is a known side effect of some viral illnesses, such as the common flu and COVID-19.

Myocarditis can also occur in rare cases after vaccination against a viral disease.

It is believed to affect fewer than 200,000 Americans each year, and deaths are rare if one seeks medical attention.

While mRNA has been around for decades, the Covid vaccines were the first to use the technology to develop a medical product used on this scale.

Experts believe that mRNA is completely safe for use, although the small precedent in its use for other drugs left many Americans apprehensive about the injections.

Billions of doses of mRNA vaccines have now been administered worldwide, with very few side effects reported.

Myocarditis – inflammation of the heart muscle – is the most commonly reported serious vaccine-related side effect.

The condition occurs when the middle layer of the heart wall becomes inflamed.

Sufferers may feel shortness of breath, fatigue, and chest pain, among other symptoms.

It usually clears up on its own, but in rare cases it can lead to heart attack, stroke, or even death.

Pericarditis occurs when the pericardium, the outermost layer of heart tissue, becomes swollen.

It has similar symptoms to myocarditis and is also a relatively mild condition that often clears up on its own.

Both conditions are known to occur in people who have recently had a viral infection, such as Covid or the flu.

Some research has suggested that Covid is significantly more likely to cause myocarditis than the injections themselves.

A study published last week in the Journal of the American College of Cardiology found that rates of disease were highest among younger people after vaccination.

Concerns about young people – who are less likely to get severe Covid – have led some countries to restrict injection for certain age groups.

Denmark and Norway have already banned Covid vaccines for non-seniors, while Sweden no longer recommends them for 12- to 17-year-olds.

He was rushed to hospital, where he was diagnosed with both myocarditis and pericarditis.

Doctors advised against Mr. Miller getting a second injection of the Covid vaccine, NBC reports.

Isaiah Harris, who was 18 at the time, of Springfield, Arkansas, also suffered a vaccine-initiated case of myocarditis last year.

He told 4029 News, “I was actually driving down the freeway, and all of a sudden my heart rate went up, and it felt like it was beating out of my chest… I woke up the next morning and could barely breathe.”

The teen was rushed to a local emergency room, where doctors determined he had a heart attack caused by myocarditis.

Just a day earlier, he had received a second dose of the Pfizer COVID-19 vaccine.

A report published in February this year also linked the deaths of two teens, one in Connecticut and one from Michigan, to the Pfizer COVID-19 vaccine.

The pair each died within a week of receiving the injection.

Scientists determined they suffered from toxic cardiomyopathy caused by an immune response to the vaccine.

The condition occurs when a person’s heart muscle can no longer properly pump blood around the body.

However, the research paper he used to justify the move was widely denounced by scholars as flawed.

The long-term safety studies being conducted by Moderna and Pfizer will be the first to determine the true risk of receiving the COVID-19 mRNA vaccines.

The shots were a new product that first became available at the end of 2020 on the basis of an emergency authorization.

While the companies have undergone rigorous testing to get approval for their injections, long-term data is still not available as the first recipients are only two years away from being vaccinated.