British Prime Minister Rishi Sunak has ruled out any adjustment to Swiss-style EU law to secure a trade deal with the bloc, instead promising that the existing Brexit arrangements “could bring huge benefits to the country”.

Speaking at the annual CBI conference in Birmingham on Monday, Sunak came under pressure to address two key corporate demands to open up trade with the EU and allow for more immigration to help the address labor shortages.

Downing Street was forced this weekend to downplay reports that the UK was considering a Swiss-style trade relationship with the EU.

Sunak said, “Let me be unequivocal. Under my leadership, the UK will not pursue a relationship with Europe based on compliance with EU rules. I voted for Brexit. I believe in Brexit. Brexit can bring enormous benefits and opportunities to the country.”

He pointed to migration as one of the areas where the UK has benefited from Brexit, saying that “we have our borders well under control. . . we are in control”.

Business regulation would also improve after leaving the EU, he said. “We need regulatory regimes that are fit for the future, that enable this country to be leaders in those industries that will create the jobs and growth of the future. And the regulatory freedom to do that is a key opportunity of Brexit.”

Sunak said the UK could now strike trade deals elsewhere, pointing to talks to sign the Comprehensive and Progressive Agreement for Trans-Pacific Partnership (CPTPP), which could open up tariff-free trade with countries in the Indo-Pacific.

While the opposition Labor Party launched a charm offensive to win over British industry, Sunak pledged that the Conservatives would remain the business party: “It is business that creates wealth and jobs that the country needs. There’s much more [the government] can do.”

Speaking before the prime minister, CBI chief Tony Danker called on Sunak to focus on the country’s economic needs across political “barriers”, including allowing more immigration to alleviate labor shortages and improving trade with the EU.

Danker told ministers they should also introduce tax incentives to support investment in the UK to offset the rise in corporate tax to 25 per cent.

As chancellor, Sunak had been discussing a super-deduction replacement scheme, which would allow tax breaks on capital expenditures, which expires in April.

But on Monday, the prime minister dodged the question of whether he would consider a new investment incentive to replace the super deduction next year, pointing instead to existing schemes such as the annual investment deduction.

Sunak vowed to “fuel the UK’s engine of innovation” and pledged support for innovative companies and entrepreneurs.

Hunt also pledged to maintain government spending on research and development, but shocked the start-up community by scrapping the widely used small business tax deductions that have spurred innovation in the UK.

Tech founders and science leaders have attacked the plans – which were heralded as an attempt to reduce abuse of the system – as a backward step if the UK is serious about developing companies in key industries. 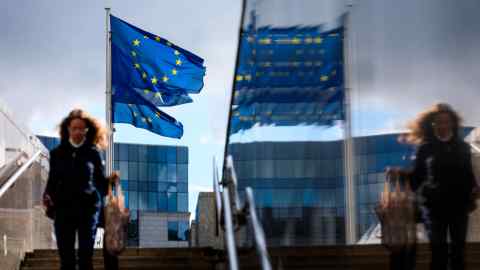 On Monday, Sunak said the UK would have “the most attractive visa regime in the world” for entrepreneurs and skilled tech workers.

He also promised to work out plans to help energy-intensive companies, with government support expiring in March next year. But he said aid would target those most in need.

Sunak said he knew how “tough” it had been for energy-intensive companies. But he added that it was “right and responsible to adjust how that support works. It will focus more on those companies that need our help.”

He added: “We recognize a certain problem with a group of industries that are very dependent on energy and we need to make sure we have a plan in place and you can expect the Chancellor to address that.”