Saudi Aramco has announced a $7 billion investment in a petrochemical plant in South Korea as part of a $30 billion package of deals between Riyadh and Seoul as Crown Prince Mohammed bin Salman forges closer partnerships in Asia.

The deals, including the investment by the world’s largest oil producer, were announced on Thursday during the first day of Prince Mohammed’s visit to Seoul. Saudi Arabia’s day-to-day ruler is touring East Asia, including Japan and Thailand. Chinese President Xi Jinping is expected to visit Saudi Arabia next month.

Saudi Arabia’s investment minister told domestic media that the total value of the deals announced in Seoul was $30 billion.

South Korean state energy monopoly Kepco and four other Korean companies also signed a memorandum of understanding with the Saudi Arabian Public Investment Fund for a $6.5 billion hydrogen and ammonia plant in the Gulf Kingdom.

Saudi Arabia is betting on hydrogen despite a limited market for the energy source. A factory developed in collaboration with US chemical company Air Products is expected to go online in 2026. The Korea Times reported that the other factory would be built in Yanbu on the Red Sea and production would start in 2029. 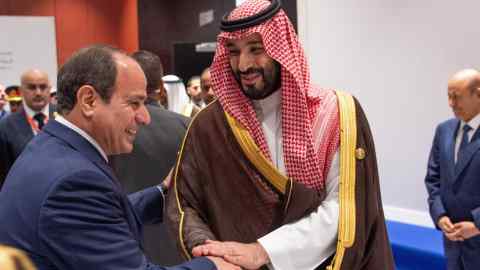 Korean heavy industry giant Hyundai Rotem also signed a memorandum of understanding with the Saudi government to collaborate on rail infrastructure for the mega-project Neom, the flagship of Prince Mohammed, a carbon-free city built in a 170 km line through the Saudi Arabian desert.

“In particular, he said he wants to dramatically strengthen cooperation with South Korea in the areas of defense industry, infrastructure and construction,” said a South Korean presidential spokesman.

South Korea, a close ally of the US, imports nearly 93 percent of its energy and natural resources, according to government figures, with about 60 percent of its oil imports coming from the Middle East.

During a visit to Seoul earlier this month, Saudi Investment Minister Khalid al-Falih urged South Korean start-ups to use his country as a “platform” to enter the global market, citing its popularity in Saudi Arabia. Arabia of Korean Culture, Fashion and Cosmetics.

Donald Trump’s return to Twitter couldn’t have come at a worse time.

Twitter impales vandals who threw black paint on famous painting in Austria: ‘Prison is not enough’