The infamous Tyrannosaurus Rex – or T. rex – could weigh as much as 15,000 kg when it roamed the earth.

This is slightly more than the weight of two elephants, or a London double-decker bus, and is 70 percent more than previously believed.

Researchers at the Canadian Museum of Nature in Ottawa built a model that predicted the prehistoric beast’s maximum size.

So far, only 32 adult T. rex specimens have been discovered out of an estimated population of 2.5 billion.

However, researchers say the discovered specimens may not be an accurate representation of the species, and undiscovered individuals may have been much larger. 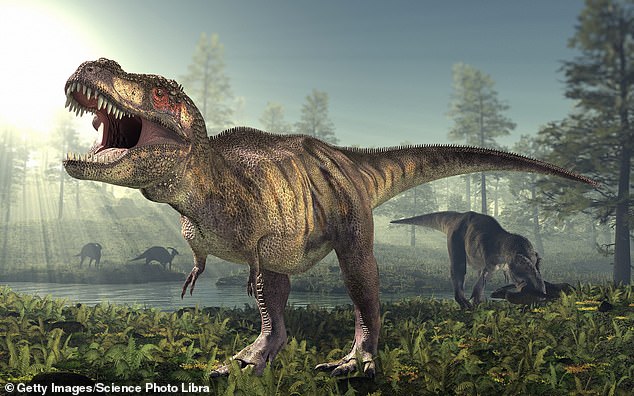 Tyrannosaurs rex (pictured) was a type of bird-like, carnivorous dinosaur. It lived between 68 and 66 million years ago in what is now the western side of North America

Tyrannosaurus rex was a type of bird-like carnivorous dinosaur.

It lived between 68 and 66 million years ago in what is now the western side of North America.

They could grow up to 12 meters long and 4 meters high.

More than 50 fossilized specimens of T. Rex have been collected to date.

The monstrous beast had one of the strongest bites in the animal kingdom.

An artist’s impression of T. Rex

They used this data to build two models that predict the dinosaur’s typical growth curve over its lifetime.

One of these models assumed that the species exhibited sexual dimorphism in body size – with females and males growing to different weights – and the other did not.

Dr. Mallon told Live Science, “If T. rex were dimorphic, we estimate it would have weighed up to 24,000 kg, but we rejected that model because if it were true, we would have found even larger individuals by now.”

Earlier this year, another study claimed that T. rex could actually be three species, including T. regina, or the “queen of the dinosaurs,” and T. imperator.

However, this was later refuted by other scientists who said there was not enough evidence to split the iconic species.

Researchers presented their model and prediction about adult T. Rex body weight earlier this month at the annual meeting of the Society of Vertebrate Paleontology.

While Mr Mallon confirmed on Twitter that he is in the process of “tweaking” the final manuscript of this study, he also cautioned that the results are speculative until a specimen of this size is discovered.

He tweeted: ‘Our back-of-the-envelope calculations suggest that a 15,000 kg animal is mechanically feasible, but that requires more rigorous testing.’

“We’re talking about the equivalent of people being 6’9,” Dr. Hone added Twitter. 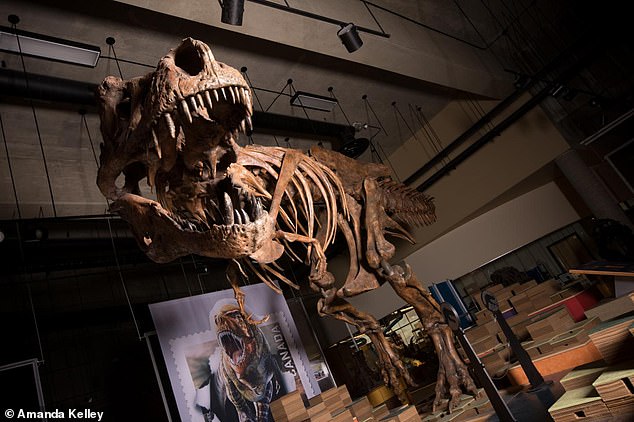 Research from last year revealed that humans could have outrun the T. Rex, as they enjoyed a “leisurely” walk at just 2.8 miles per hour (4.6 kph).

Scientists estimated the stride length of a T. Rex specimen named “Trix,” and reconstructed its tail to discover the rhythm in which it would swing.

Thus, the animal’s walking speed was comparable to that of emus, elephants, horses and humans.

Other studies have explored why the dinosaur had such small arms relative to its body.

One study suggests they evolved them to reduce the risk of being bitten by others hungry adult T. rex as they devour a carcass.

Another claims that dinosaurs with smaller front legs used them to grip each other during mating, or to help them get up after a fall.

T. rex had complex nerve sensors in the tips of its jaws to help it recognize what it was eating, study shows

Tyrannosaurus rex had nerves in its jaw that would allow it to recognize different parts of its prey and eat differently.

This is the conclusion of experts at Fukui Prefectural University, who scanned the fossilized lower jaw of a T. rex and reconstructed the nerve pattern inside.

The terrifying reptiles may also have been skilled enough with their mouths to use them to make nests, care for their young, and even communicate with each other.

While the internal structure of the jaw has been studied before in several fossil reptiles, this is the first study to focus on T. rex, the team said. 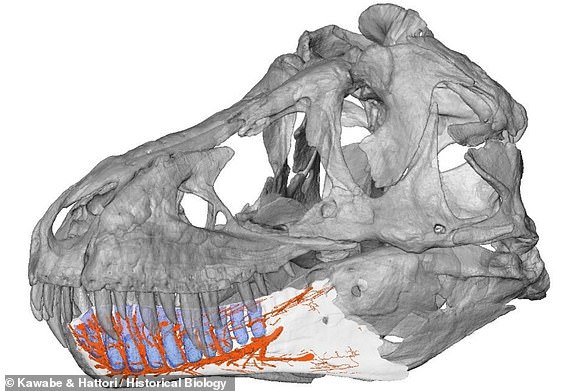 Scientists register a virus that ‘sniffs’ cells looking for a way in: ScienceAlert