She is coming! Lindsay Lohan is in town and she’s coming!” an excited publicist holding her phone screams as I take a breather from Mark Ronson’s DJ set.

To my right Lucien Laviscount – the handsome British actor from Emily in Paris – sits among the six-foot-tall models and gorgeous, glamorous influencers I half recognize but can’t name. Earlier I had come across supermodel Joan Smalls posing in front of a grand white staircase. The night before, I’d been to a private Lenny Kravitz concert and stared at him as he lay by the pool at the after-party.

Where am I to be surrounded by such an eclectic mix of celebrities? New York Fashion Week? A prestigious awards ceremony in Los Angeles? Miami on a Saturday night? No, I’m in Tampa, on Florida’s west coast, the city usually associated with cigar factories, the Busch Gardens theme park, the gigantic Florida Aquarium and, as a colleague pointed out, the magical mike movie. A dining area at the Tampa Edition

I’m here for the launch weekend of the Tampa Edition, the city’s first five-star hotel. Created through a collaboration between Ian Schrager – the entrepreneur behind New York’s legendary Studio 54 nightclub – and Marriott International, it is the brand’s second hotel in Florida (the Miami Beach Edition opened in 2014) and the 15th worldwide. Known for sleek interiors, super cool event schedules and star-studded client lists, the opening of the Tampa edition brings instant kudos – Kravitz is rumored to have been paid $1 million (approximately £883,000) for his performance. So why Tampa, and why now?

The hotel is the crowning achievement of Water Street Tampa, a new $3.5bn (£2.9bn) development spearheaded by Jeff Vinik, owner of the Tampa Bay Lightning ice hockey team, and Bill Gates. Fifty-six acres of the city’s long-neglected waterfront are being transformed into a high-end neighborhood with airy co-working spaces, boutiques and restaurants. Phase one started in 2017 and phase two is expected to be completed in 2027. Schrager says he sees the Tampa edition as “part of a masterpiece.”

On the 15-minute drive from the airport to the hotel, excitement and anticipation compete with a faint cloud of jet lag after my nine-and-a-half hour flight. Currently there is only one direct flight per day from London to Tampa operated by British Airways. But – partly influenced by the opening of the Edition – Virgin Atlantic will launch its daily service from Heathrow on November 29, with brand new aircraft.

From the car window, the streets seem vast. The sun bounces off glassy skyscrapers and palm trees cast shadows on the sidewalk. Extensive murals and vibrant, colorful graffiti on derelict apartment buildings give everything a raw, artsy touch. I’m so busy looking up that I almost miss the hotel.

In the lobby I am catapulted into a hive of activity. Important-looking people hold business meetings on posh white sofas as I stand at the check-in desk in a line of guests loaded with Louis Vuitton luggage. The walls are covered in foliage from floor to ceiling, and there’s that Edition scent – the exclusive Le Labo scent of black tea wafts through each of the brand’s hotels.

I’m eager to explore, so I dump my bags and hit the road right away. Wandering around, I find that one of Tampa’s best features is its walkability. There’s no need to follow complicated subway routes or wait for unreliable buses – everything flows, especially thanks to a free and efficient streetcar service and the Riverwalk, a 2.6-mile waterfront path that connects the city’s main attractions.

The waterfront museums offer something unique: the Florida Museum of Photographic Arts has an exhibition of Mariette Pathy Allen’s works on gender identity and norms (until March; £9; fmopa.org), while the Tampa Museum of Art displays selections from Alfred Frankels Artists of Old Floridafeaturing works from 1840 to 1960 (until January 23; £18; tampamuseum.org). 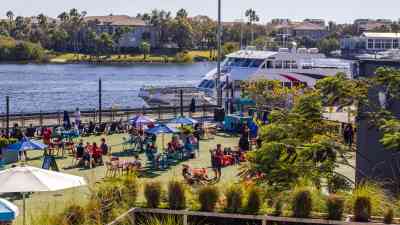 At Sparkman Wharf I also feel some of the buzz I was promised. Brightly colored food containers of turquoise, pink and yellow stand side by side around a large beer garden. I am reminded of the Boxpark in Shoreditch, East London, when it first opened – not lavish or luxurious, but new and exciting for a previously underserved area.

Tampa is a developing city. I’m amazed by the jazzy, panoramic view of the city from my seventh-floor suite, but the glint of illuminated buildings and car headlights is subdued by gritty construction sites and the echo of machinery and workmen. Walking one block from the hotel, within ten minutes I can see an oyster bar, a spa, an F45 gym, BodyRok and cycling studios, and a hybrid work-coffee shop space labeled “coming soon.”

I’m trying not to compare it to the Sunshine State’s gleaming east coast, and locals are quick to warn me about that—beaches and nightlife may glisten in booming Miami, but that’s not what Tampa wants to be. The local community has played an important role in the success of the Edition and other new developments in the area. Schrager says that since the hotel opened last month, residents’ enthusiasm for its restaurants — Lilac, Market and Azure, all by John Fraser (formerly at New York’s Michelin-starred Nix) — is “off the charts.” ” has been.

The rooftop pool, however, is the social heart of the hotel and almost designed for Instagram – verging on a Florida cliché, with candy-colored sunbed cushions and a pink floral theme. But there are subtleties, too: The black-and-white photos of Mick Jagger and Keith Richards in one of the bedrooms were selected because the Rolling Stones were performing in nearby Clearwater in 1965. 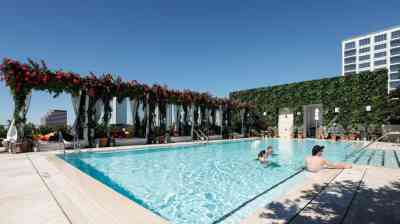 The swimming pool at the Edition

After nearly six decades, Tampa still has a rock’n’roll edge, but change is on the horizon. You can feel it in the pockets of the city – there is an excitement, the feeling of being somewhere. It’s not a place to relax for two weeks, but for the creative and carefree, Tampa is an up-and-coming party destination worth keeping an eye on.

It hasn’t reached its peak yet, but it’s definitely coming — not least because Kravitz’s four million Instagram followers now know about it.

Roisin Kelly was a guest of the Tampa Edition, which room-only doubles from £600 (editionhotels.com). For more see visittampabay.com. Fly to Tampa 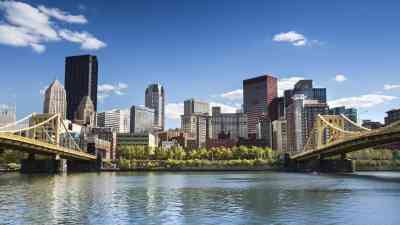 1. Pittsburgh, Pennsylvania
Surrounded by steep green hills and situated around the Monongahela and Allegheny rivers, Pittsburgh’s fortunes have been revived since the lull after the boom of the 20th century. Pop art works by his most famous son, the Andy Warhol Museum, while a complete T. rex skeleton is the opener at the Carnegie Museum of Natural History. You can also take a retro 19th-century cable car for great views of the city or eat in the riverside Strip District.
Details Four nights only from £799pp, including flights (purelytravel.co.uk)

2. Dallas, Texas
Dallas has a lot to offer – if you’re not in the mood for America’s greatest urban arts district, try Tex-Mex cuisine at Oak Lawn or head downtown to discover more about JFK’s final moments at the Sixth Floor Museum. The adjacent city of Fort Worth is also worth a visit, with its Old West flavor and twice-daily cattle drives. Stay longer and take a road trip to other urban landmarks in the Lone Star State: liberal, music-loving Austin; the Alamo in San Antonio; Houston-based NASA.
Details Thirteen night stays only from £1,623pp, including flights and car hire (americaasyoulikeit.com)

3.Portland, Oregon
British Airways started flying five times a week from Heathrow to Portland in June, with service to be expanded to daily from May next year. Scenes of food trucks, coffee and craft beer thrive in America’s trendiest city, accompanied by waterfront weekend markets and independent boutiques in the Pearl District. The expansive Japanese garden and nearby vineyards of Willamette Valley make for quieter getaways. So does a day at the Mount Hood volcano that towers over the city.
Details Just five nights from £1,379 pp, including flights and car hire (americansky.co.uk)

Her luggage was missing. Then a kind stranger came to her aid

Premium economy round-trip flights to Europe for less than $1,300

How SFO Ended Up as America’s Best Airport