What is the Meta Quest Pro FOV? Let’s see 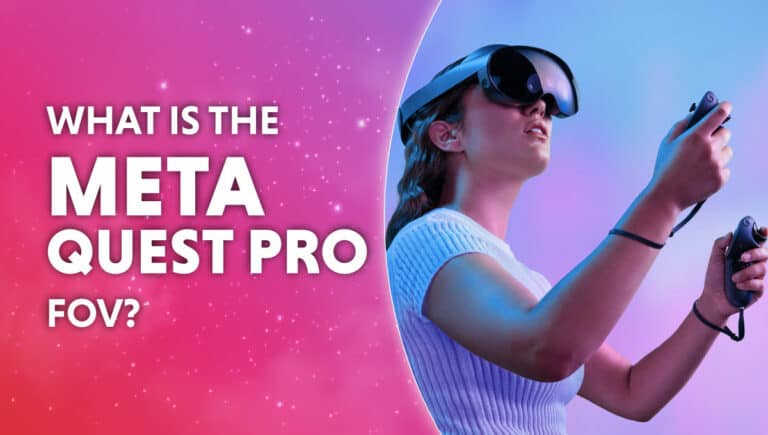 This isn’t surprising as the official store page is a bit vague when it comes to the tech stuff. This largely meant scraping the actual Meta Quest Pro specs from various sources, with no real assurance of their accuracy.

Annoyingly, the official Meta website doesn’t mention the field of view, but several publications agree that Meta Quest’s field of view is 100-110° when measured horizontally. This is an increase from the ~95° of the Meta Quest 2, which is a much needed improvement.

What does FOV stand for?

FOV stands for ‘field of view’. That is the “size of the observable world seen at any given time.” in layman’s terms, this simply refers to how much you can see.

This is normally measured horizontally because of the binocular vision humans have, due to having two eyes side by side. vertical FOV is also a thing, but it matters much, much less than horizontal. if our eyes were stacked on top of each other, we would be concerned about the vertical field of view.

Anyway, now that we know what FOV means, let’s see why it matters, especially when it comes to VR.

Why is FOV important for VR?

Well, the closer the FOV can get to the actual FOV of your eyes, the more realistic the rendering of the virtual world will be, with details becoming less clear towards the ends of your vision, similar to real life.

In addition, motion sickness is taken into account. According to Thomas Stoffregen, a kinesiologist at the University of Minnesota, around 40-70% of people get motion sickness after 15 minutes of use.

This is a result of the brain seeing something different than what the body is feeling, and yes, FOV affects this. If your brain is used to seeing more than when you use a VR headset, it’s not surprising that motion sickness can set in.

So the Meta Quest Pro’s field of view is close 100-110 degreeswhich is still less than the Field of view of 135 degrees of the naked eye. This means there’s still a chance of motion sickness, but less, given the increase over the Meta Quest 2.

What is the Meta Quest pro FOV?

The field of view of the Meta Quest Pro is 100-110°, measured horizontally.

What is the best field of view for VR headsets?

The absurdly priced laptop I’d love to own