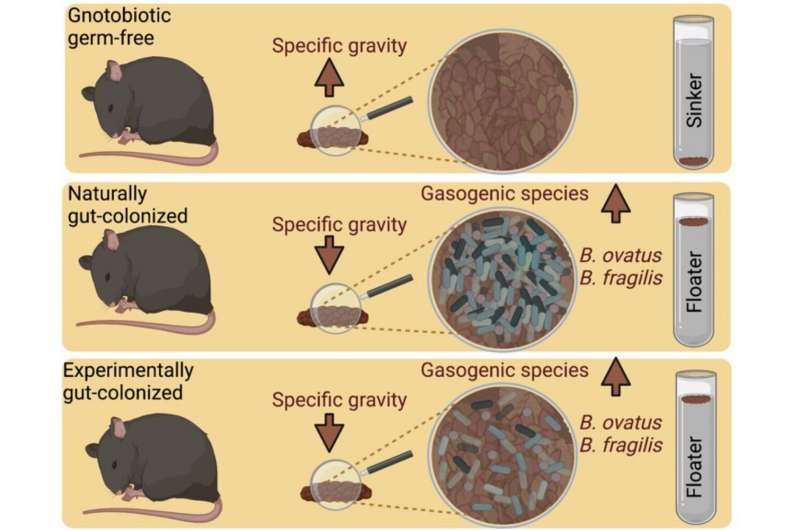 A team of researchers from the Mayo Clinic has solved the mystery of why some people see their stool float while others see their stool sink to the bottom of the toilet bowl. In their paper published in the journal Scientific Reportsthe group describes their chance discovery of the answer.

Before the 1970s, scientists believed that stool either sank or floated depending on the amount of fat it contained. Experiments have shown that this is not the case. Instead, tests on healthy human subjects showed that the difference was due to the amount of gas in a given fecal sample. But the question remained: Why do some people’s stools tend to have more gas, and therefore more buoyancy, than others’?

In this new effort, the researchers studied the microbiome of several lab mice and sterilized the guts of some of them as a way to isolate differences in digestive and overall health related to different bacteria. As the experiments progressed, the researchers noticed that none of the fecal samples produced by the sterilized mice floated. In mice, normally half of the samples are floaters.

That suggested that floating stool was linked to the composition of the gut microbiome. The researchers then collected stool samples from healthy mice that were not part of the original study but produced floaters, and injected the material into the intestines of the sterile mice. They found that all of the test mice started producing floaters. This, according to the researchers, suggests that the reason some stools float is due to the nature of the bacteria in the gut — some produce more gas than others.

The researchers were unable to isolate the bacteria that produced more gas, but did note that Bacteroides ovatus had previously been found to cause more flatulence in human patients. Logic suggests it’s likely one of the culprits responsible for the formation of floaters in humans, and perhaps lab mice as well. The team suggests more work will need to be done to confirm their suspicions and to find other bacteria involved in producing more gas, and thus floating bacteria.

This document is copyright protected. Other than fair dealing for private study or research, nothing may be reproduced without written permission. The content is provided for informational purposes only.